UNESCO defines three types of participation in culture: reception, through attendance at performances and exhibitions; production, through amateur engagement in creative practice; and interaction, through some form of dialogue, often digital, between the arts organization and the participant (Morrone, 2006). Arts management strategies can address all these areas. But what much of the literature shares is an assumption that the deficit lies with the non-participant, in terms of either understanding or opportunities to engage. Strategies to increase participation therefore commonly focus on education programs or concessionary pricing.

However, some argue that the deficit may be in the management of the organization, or the cultural offer, as much as with the recipient (Belfiore et al., 2011). It is argued that the existence of “cultural elites” (Griffiths, Miles and Savage, 2008, p. 198), which have created a level of self-interest and an “interminable circuit of inter-legitimation” within the arts sector (Bourdieu, 1984, p. 53), may limit the range of voices being heard in decision-making. Attempts to engage those beyond the professional cultural elite are often met with accusations of crass populism (Tusa, 2000), which may be the greatest barrier to increasing participation.

The data collected and analyzed for the research include the results of a review of grey literature produced by national arts policy-makers, a survey of a selection of local authorities and a case study. Eighty applications from arts organizations that applied for Arts Council England funding in 2010 were also examined, to assess the variety of interpretations of the participation agenda by different applicants. 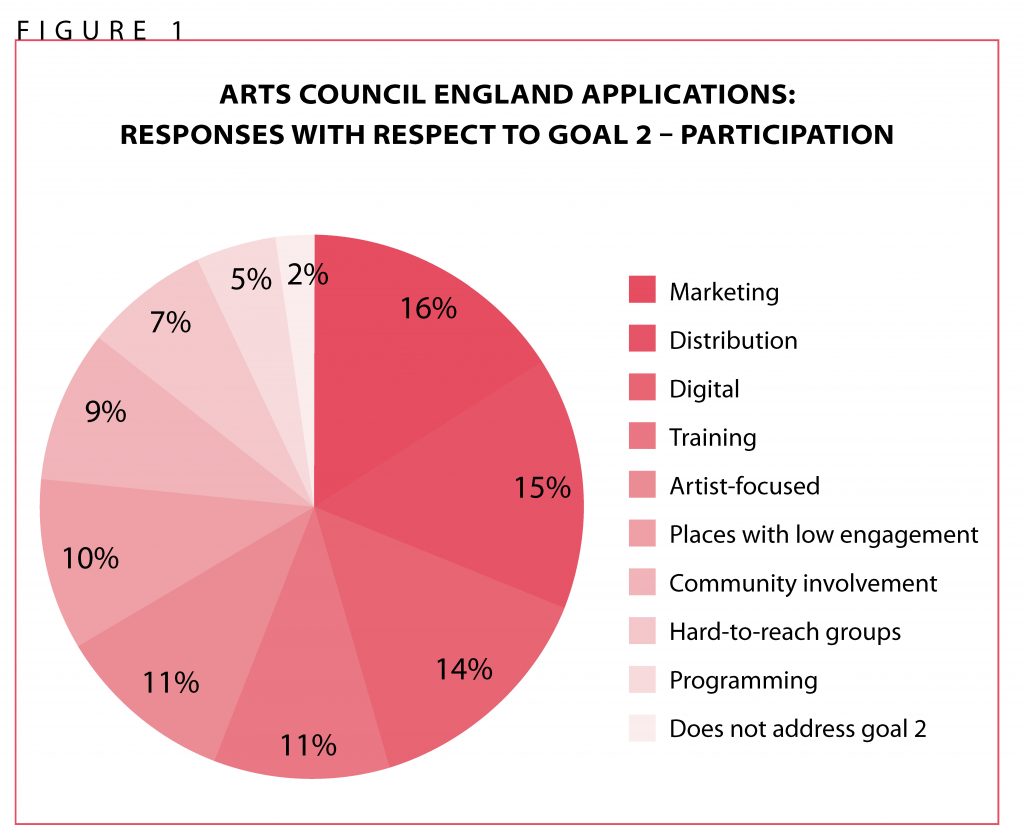 A survey questionnaire was sent to arts officers at a selection of 20 local authorities that had identified themselves as having an interest in participation by adopting the national cultural indicator (DCMS, 2008). Also, in-depth one-to-one interviews were conducted with a range of arts professionals. The sample comprised six policy-makers from central and local government.

All interviewees were asked to define what they understood by “participation” and comment on how important they thought it was in the arts, and why. Finally, they were asked for their personal views on the pros and cons of participatory decision-making.

Also, in-depth one-to-one interviews were conducted with a range of arts professionals. The sample comprised six policymakers from central and local government, including one former minster for culture; nine Arts Council England staff members; and nine arts managers or consultants.

The case of Contact, located in Manchester, UK was cited repeatedly in the in-depth interviews as the most successful example of participatory decision-making in the arts. It was therefore selected as a case study to examine the nature of the perceived “success” and to consider broader implications for arts managers.

Participatory Decision-Making in Practice: A Case Study of Contact in Manchester

Contact Theatre started life in the 1970s out of the University of Manchester. For many years it existed as a “repertory theatre in bright colours” (Arts Council England officer), attracting school parties to productions using set texts from the school curriculum. After a major refurbishment a new artistic director, John McGrath, took over in 1999. McGrath stayed with the organization for 10 years. His aim, influenced by his background in both experimental theatre and youth work in Brazil, New York, Liverpool and East London, was to make the venue more contemporary in style, more diverse in outlook and more inclusive in atmosphere.

In all the interviews conducted, both within the organization and across the city, there was an overwhelming sense that under McGrath’s tenure the organization had gone through a transformation, to what is now described as a cross-art-form laboratory. According to its business plan (Contact, 2011), it has significantly higher engagement by ethnic minorities and a wider socio-economic mix than venues elsewhere in the city: 36% of its theatre audiences, 57% of its workshop participants and 29% of its board are from black or minority ethnic backgrounds. In addition, 65% of its audiences and 93% of its workshop participants are aged 13 to 30. This is in stark contrast to average theatre audiences in England, which have been found to be predominantly white and middle-aged, with the under-30s being the least likely to attend (Chan et al., 2008).

Contact was said to have “a real street presence” (local artist), outside the theatre as well as within. All the staff, including the artistic director, were said to be accessible and to reflect a deep knowledge and understanding of a wide range of cultural practices, not just theatre. The ethos within the building was described as creating “a place to get involved” (participant) or a “hub, where a lot of young people feel comfortable going into and just hanging out” (participant). As a result, there is an informal dialogue on a regular basis between staff and users.

It was said that, under McGrath, this led “organically” to involving people in decisionmaking, asking for volunteers from among those using the building to sit on decision-making panels or to attend and review theatrical shows that might be brought to the venue. There were no criteria for selection other than ensuring that the same faces did not sit on panels each time. Also, whenever possible the theatre paid the young people taking part, the aim being to ensure that a large number of people were engaged in such processes and that their voices informed artistic choices. As a result, many young people at Contact were said to have also developed their skills and some of those interviewed had gained their first employment through the theatre.

Many of the arts managers interviewed believed that the arts are not slow adopters of participatory decision-making and that this practice is common in the arts. One person believed that all arts organizations are involving the public in decision-making more now than ever. However, when asked to name examples one interviewee acknowledged that “we use the same five examples” (Arts Council England officer) whenever discussing participatory decision-making. Often, Contact was the only name people could think of where the practice is embedded in the management of the organization. Other examples tended to be galleries and theatres involving the public in short-term co-curation projects rather than in budgeting or management.

Some of the interviewees argued that there is no evidence the public want to be involved in how arts organizations are managed. However, public value research in the United Kingdom found that public consultation called for not only greater transparency in how decisions in the arts were made, but also greater involvement in decision-making processes (Opinion Leader, 2007).

There was a widely held view that participatory decision-making is most effective when “people genuinely want to change the power relationships in the organization [and] expect the outcomes to be different [from what they are]” (government adviser). When the process is short term, as when participants are invited to co-curate an exhibition or season of work, there is evidence that they are effective in building public value but not in influencing organizational change. Therefore, such processes may be most transformative when embedded across the organization and spread over the long term.

However, it was apparent that those with little or no experience with such practices are often resistant to or fearful of the impact of widening the range of voices through which decisions are made. In contrast, there was acceptance of such practices among those who had experience working with the public. This makes a powerful case for developing small, project-based experiments within arts organizations in order to build the capacity and confidence of arts managers in delivering such programs.

Over the longer term, however, the challenge is for arts managers to embrace the possibilities of participatory decision-making and, rather than replicating existing models, try to find their own way to implementing it within their organizations and break down the fourth wall, which often acts as a barrier between the organization and its public, whoever they might be.