Many of the museum executives in the Western world currently belong to the baby boom generation and will retire in the next few years (Bernhardt 2013; Sargeant and Day 2018; Stewart 2016). The predictable result will be a wide “museum leadership gap” (Baldwin and Ackerson 2006, 349) and, consequently, a need for the recruitment of new leaders. As recruiting at the executive level is a critical element in the success of a museum (e.g., Abruzzo 2013; Boyd 1995; Den Hartog et al. 2007), museums must not simply select any new leader. They must select the “right” candidate – that is, a leader whose attributes are the right fit for the specific institution (Abruzzo 2013; Derue et al. 2011; Zaccaro 2007, 2012). Identifying the key attributes of a new leader is therefore a core determinant of successful leader selection.

However, few studies in the museum management literature address the attributes necessary for a successful museum executive. Furthermore, the studies that do so focus either on specific traits, or on specific skills. This single-focus approach to leadership has long been criticized in general management research (e.g., Lieber 2007; Schanz 2000; Stippler et al. 2010; Yukl 2013), with authors arguing that leader effectiveness can be predicted more accurately by the integration of leader traits and leader skills theory (Avolio 2007; Bennis 1959; Zaccaro 2007, 2012).

In this study, we use the model proposed by Zaccaro et al. (2004) as an outline for developing an integrated leadership framework for museum management. 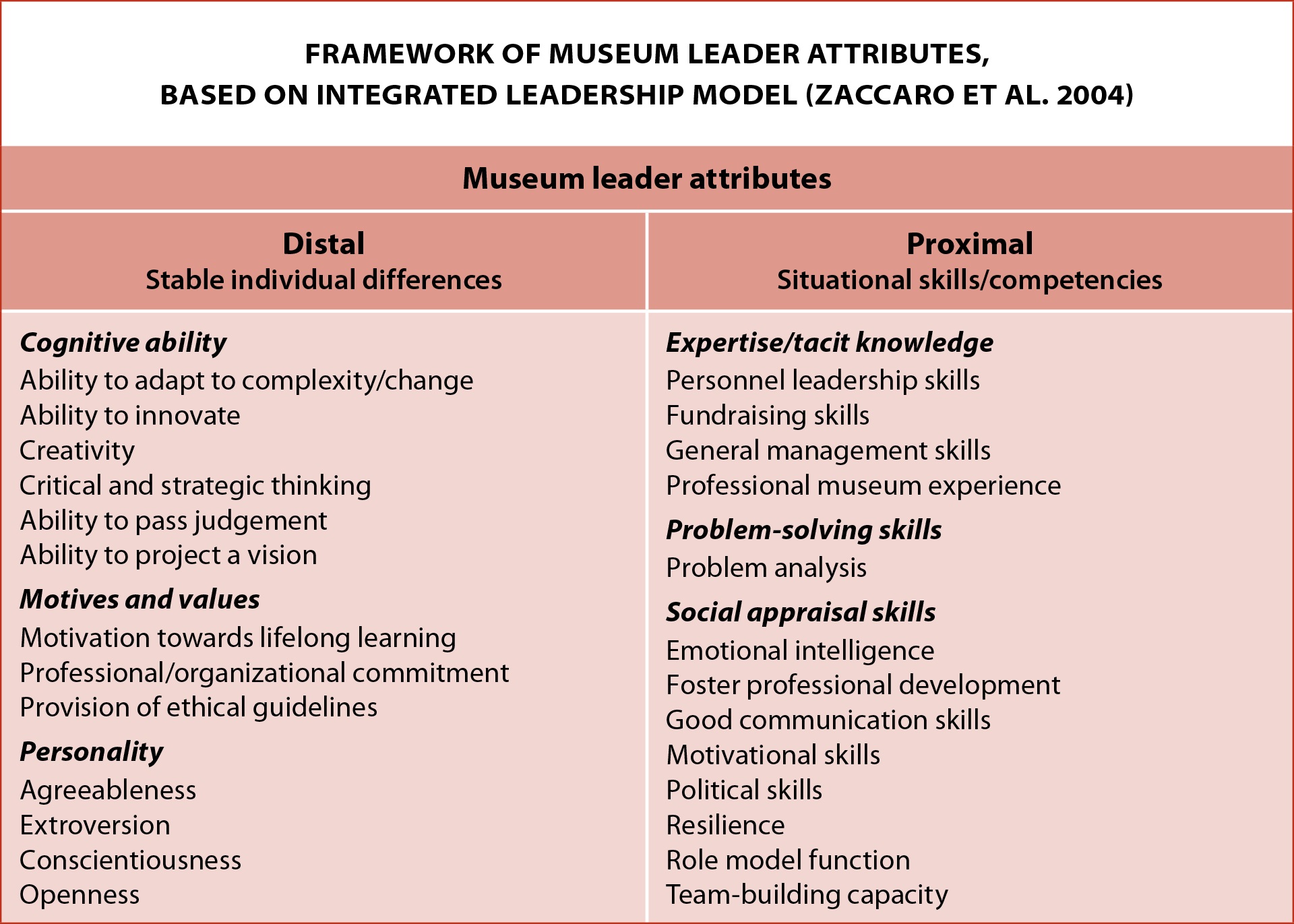 We designed an empirical study in order to evaluate the application of an integrated leadership approach to museum management practice. We examined advertisements for top-level leadership positions in museums in German-speaking countries using qualitative, structured content analysis (Krippendorff 2004; Mayring 2015). Our sample comprised 53 advertisements.

We developed a coding scheme for categorizing and analyzing the data (Hsieh and Shannon 2005; Krippendorff 2004; Mayring 2015). We then conducted a pre-test to assess the preliminary coding scheme, made some adjustments and ended-up with a final coding scheme. The revised framework of museum leader attributes had 39 subcategories – the original 26 found in the literature and a further 13 derived from the data.

Our findings reflect the typical career path from curator to museum director: museums particularly required that their prospective executives have curative experience and, frequently, scientific experience. Our findings reveal an emphasis on task-focused skills at the expense of dedicated leadership skills (e.g., personnel development, personnel leadership, motivational skills). This contradicts the picture of the emotionally intelligent, far-sighted, ideal museum leader that the literature paints. Such a divergence should be viewed with respect to the composition of our sample: primarily municipal museums.

We found that the museums also focused on administrative skills (e.g., organizational skills) and social skills (e.g., ability to manage conflicts). By contrast, personality-related and intellectual traits, such as providing ethical guidelines, and cognitive skills (e.g., ability to innovate and ability to project a vision) received little attention. The museums focused excessively on skills-based attributes and their advertisements lacked balance between leader traits and leader skills. Our sample museums appear not to have taken an integrated leadership approach when developing their job advertisements.

The museums relied heavily on standard phrases such as “good communication skills” (47% of museums), “organizing ability” (45%) and “time flexibility” (40%). These requirements are neither specific to management positions nor unique to the museum sector. The use of such standard phrasing undermines one of the original functions of job advertisements: preselecting suitable candidates by stating relevant selection requirements (Jackson 2007; Klinkenberg 1994). The museums partly compensated for this by the extensive listing of job-specific requirements.

Museum advertisements for executive positions require primarily formal qualifications as well as professional skills. Overall, we identified an emphasis on proximal leader skills at the expense of stable, distal traits.

We recommend that museums focus on a more differentiated traits-and-skills profile when selecting their executives. Our results indicate that museums tend to include a limited number of attributes in their job advertisements; the focus is on job-related and social skills. This contradicts the basic principle of an integrated leadership approach. Furthermore, Zaccaro et al. (2004) point out that the various distal and proximal attributes of their model together influence leadership. Thus, as a first step towards a more balanced set of selection criteria, museums could use our framework of museum leader attributes as a point of reference when choosing the leader attributes – both traits and skills – that best fit the position to be filled.

Contact us at mmiam@hec.ca to request a free copy of the full article published in the International Journal of Arts Management, Volume 23, Number 2, Winter 2021.

You can also browse our abridged research articles here.