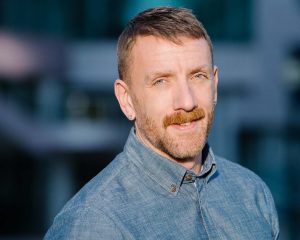 Brendan Healy was Artistic Director of the world-renowned Buddies in Bad Times Theatre in Toronto for seven seasons. He graduated from the MMIAM program in 2016 and is now the Artistic Director of Performing Arts for the City of Brampton.  What motivated him to pursue the MMIAM program and how has his career path changed as a result? Laura Adlers caught up with Brendan in Brampton to find out more.

Why did you decide to pursue graduate studies in international arts management?

I was ready for new challenges and I wanted to run a larger organization. Although I felt that I had good managerial instincts, I also knew that I was missing some fundamentals in management and business to get to the next level. My educational background to date had only been in art school. I forged my career as a theatre director before moving into artistic direction and management.

What are your primary responsibilities as Artistic Director of Performing Arts for the City of Brampton?

Brampton is a former sleepy suburb of Toronto that has in recent years grown into one of the largest cities in Canada. Its growth rate is one of the highest in North America, it has the youngest median age in the country, and over 65% of the population is non-white. As part of my portfolio, I am responsible for the management and programming of five venues spread across the city. I also participate in the development and articulation of cultural policy at the municipal level.

Which courses in the MMIAM program were the most valuable to you for your career and why?

Each course had a lot to offer me, but I believe that my thesis research is the thing I will carry with me the longest in my profession. It gave me the opportunity to dig deeply into an area of professional curiosity – organizational innovation in non-profit theatres –  and I was able to research an international organization that I had long admired, South London’s Battersea Arts Centre. It truly felt like the culmination of so much of what I had learned and it allowed me to tackle a number of questions that had been circulating in my head for a while.

What did you gain personally and professionally from living and studying in four different countries with students from around the world?

Adaptability is a big one. The ability to perceive and acknowledge differences while also finding commonalities is another one. But, most importantly, I expanded my toolbox of ideas, approaches, and solutions to managerial problems.

Which campus was the most memorable for you and why?

What made them all memorable was how they compared to and contrasted with one another. It’s really hard to look at them in isolation. However, on an emotional level, I was particularly moved by our time in Bogotá. There is an energy to that city that is so incredibly exciting and I find the ways in which culture and community intersect there to be very beautiful.

What is one of the greatest challenges facing arts managers in Canada today?
How do you think these challenges need to be addressed?

There are currently a number of social, economic, political and technological changes that are impacting arts management in Canada. The country is going through tremendous demographic changes, rooted in immigration and urbanization. The rapid evolution of the internet and mobile technologies have induced huge changes in customer behavior. Audiences have an unprecedented level of choice for arts, entertainment and culture, and this has resulted in the proliferation of multiple, smaller niche audiences. The amount of free entertainment and user-generated content on the internet has created a challenge for traditional arts and culture institutions that operate under a different paradigm. The relative uncertainty of the economy and the slow recovery from the 2007 financial crisis have had an impact on the long-term reliability of public funding.

All of these challenges mean that arts managers of the future will need to focus on innovative, outside-the-box thinking to stay alive and relevant. This means looking at new ways of developing and integrating audiences in cultural institutions that undo some of the rigid separations between artists and audiences. It means actively disrupting the Eurocentric narratives and colonial dynamics that get perpetuated through institutionalized art and culture. It means fully embracing technologies and the multiple ways in which they can enhance and/or form the backbone of a cultural experience. It means expanding the way in which arts and culture defines its value to society beyond the “art for art’s sake” argument. It means looking at new managerial structures inside our arts organizations that foster greater adaptability and responsiveness to the needs of the communities that we serve.