Status is defined as “an organization’s position in the social system that can be ranked among other positions based on its relative prestige or social esteem” (Jensen et al. 2011, 87). It serves as the leading explanation for an organization’s tendency to conform or distinguish itself in a given field. The position occupied by an organization in the status hierarchy affects its ability to deviate from established practices and conventions by offering products characterized by new or innovative content (Durand and Kremp 2016; Philipps and Zuckerman 2001). Some argue that middle-status actors conform more strictly to conventions; conversely, high- and low-status actors are free to engage in deviant behaviours in that the former are confident in their legitimacy and social acceptance and the latter experience less pressure to conform because they expect to be socially excluded regardless of their actions.

A less researched aspect is whether and under what conditions organizations are willing to undertake nonconforming actions that diverge from the dominant logic of status distinction and may alter their status positions. This study, therefore, focuses on the willingness of organizations at different status levels to innovate their product offering by satisfying divergent status-based expectations, and under conditions that affect their freedom to continue to do so. Opera will be the field under study.

Challenging the dominant criteria for status distinction to ascend the status hierarchy is a strong incentive for middle-status organizations to embrace a nonconforming behaviour, while the risks of status loss and commercial failure, respectively, constrain the freedom of high- and low-status organizations. Furthermore, I argue that the willingness of high-, middle- and low-status organizations to increase the unconventionality of their product offerings to follow different logics of status distinction is affected by how they decide to present their products and, more specifically, by their degree of aesthetic conventionality. The latter refers to the decision to present their products through taken-for-granted forms and visual appearances (Bloch et al. 2003; Rindova and Petkova 2007). By concealing the controversial aspects of content that challenge dominant expectations, increased aesthetic conventionality confers high- and low-status organizations with the discretional power of deviance, thus protecting them against the risk of status loss and commercial failure. Conversely, by de-emphasizing the innovative and counter-normative aspects of unconventional product content, aesthetic conventionality creates barriers to upward mobility at the middle-status level, which in turn reduces the incentives for middle-status firms to engage in nonconforming behaviours.

In this study, I develop and test hypotheses with data on the Italian opera market from 2004 to 2011 and focus specifically on how the status of theatres affects their willingness to diverge from a dominant logic of status distinction by increasing the unconventionality of their repertoires. I subsequently hypothesize that the success or failure of status in fostering unconventional repertoire decisions in the field of opera is contingent upon the level of opera houses’ commitment to an authorized, conventional way of presenting their repertoire to different audiences (aesthetic conventionality). The latter factor, indeed, reshapes the incentives for opera houses in different status positions to program unconventional repertoires. 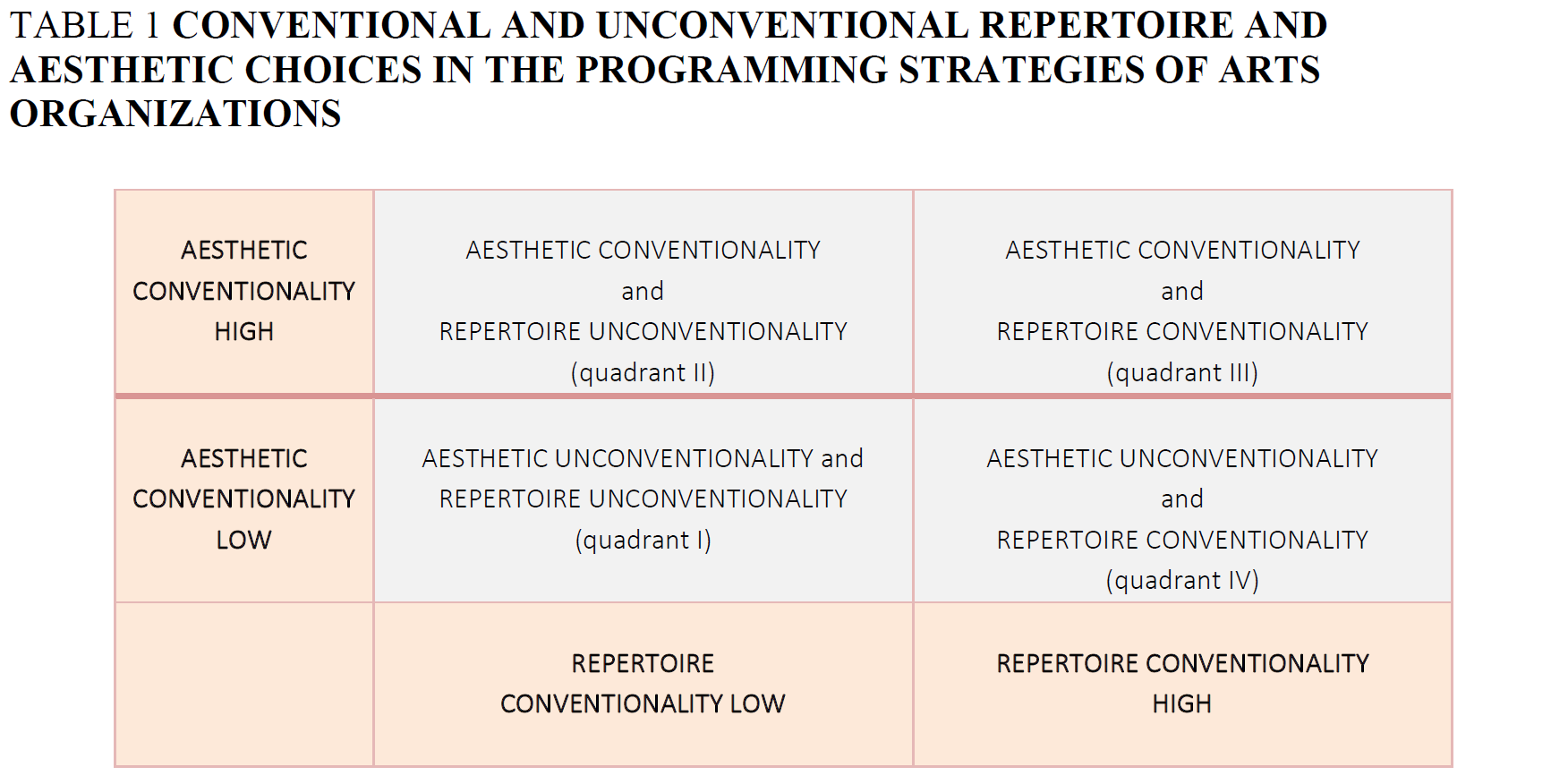 However, as tax-exempt, government-funded organizations, Italian opera houses also have a social obligation to design their programs not only on the basis of conservative tastes but also in terms of what innovation-oriented audiences (risk-taking experts and attendees) regard as “good” or “necessary” for future generations of spectators and for the development of the art form (Cancellieri and Turrini 2016). Programming unconventional repertoires responds to an increasingly important status-based logic enacted by those who support the rejuvenation and artistic renewal of opera programs (Castaner and Campos, 2002). In this scenario, theatres are subject to competing pressures to conform and to deviate from the conventional repertoire. Theatres embrace divergent status-based criteria when they program unconventional operas, either by bringing back operas that have fallen into disuse (such as La Wally by Catalani) or scheduling new works by contemporary composers. This act of deviance entails both risks and benefits for opera houses. On the one hand, it exposes them to the risk of criticism from conservative opera attendees, which can threaten their status and trigger economic penalties. On the other hand, it enables opera houses to challenge conservative tastes and contribute to the diffusion of a different logic for status recognition that, supported by innovation-oriented audiences, offers them opportunities to improve their social standing. However, firms within different status brackets are differentially exposed to the social and economic penalties and incentives that stem from these actions and their willingness to deviate may vary.

Contact us at mmiam@hec.ca to request a free copy of the full article published in the International Journal of Arts Management, Volume 23, Number 1, Fall 2020.