Institutional theatre in Finland, as in most countries, has been dominated by the idea of a single artistic leader. However, this notion has been under question ever since the first Finnish professional theatre was established in 1972, and especially since the independent theatre movement took hold in Finland in the 1970s. Independent theatrical groups questioned the conventional institutions and their management practices. Another new wave of independent theatres appeared in the 1990s, many of them favouring democratic decision-making, a low level of administration and, often, collaborative leadership models (Wilmer and Koski, 2006). In recent years a new type of dual leadership has emerged, especially in medium-sized and small theatres and independent theatrical groups. However, there has been neither systematic research nor popular writing on collaborative leadership in Finnish theatres.

The new variations of dual leadership appeared in Finnish theatre concurrent with increasing professionalization of theatrical management and increasing privatization of municipal theatres. The emergence of these new types of dual leadership may be related to trends and developments in artistic practice. Most of the leaders we interviewed were in their thirties or forties. Some of them can be viewed as members of the new independent theatre generation of the 1990s who received their artistic education in the first decade of the new millennium. These generations are accustomed to process-centred methods and the ideals associated with artistic collaboration. Traditionally, artistic directors and managing directors/CEOs have been recruited separately. In the case of newer leader duos, however, very often the duo is formed before they apply for the position, as a pair, or the duo has founded a theatre together.

Six leader duos were interviewed (which we refer to by number; see Table 1), representing theatres of various sizes and types. All of the duos had been formed by the choice of both individuals and most had gained their position as leader either by founding their own theatre or by applying to a theatre as a duo. Ten interviewees were employees of theatres with a dual leadership model in place. They represented different staff groups: actors, other artistic staff (e.g. costumiers), technical staff and administrative personnel. All had either permanent contracts or temporary contracts for more than one production; none had a production contract. 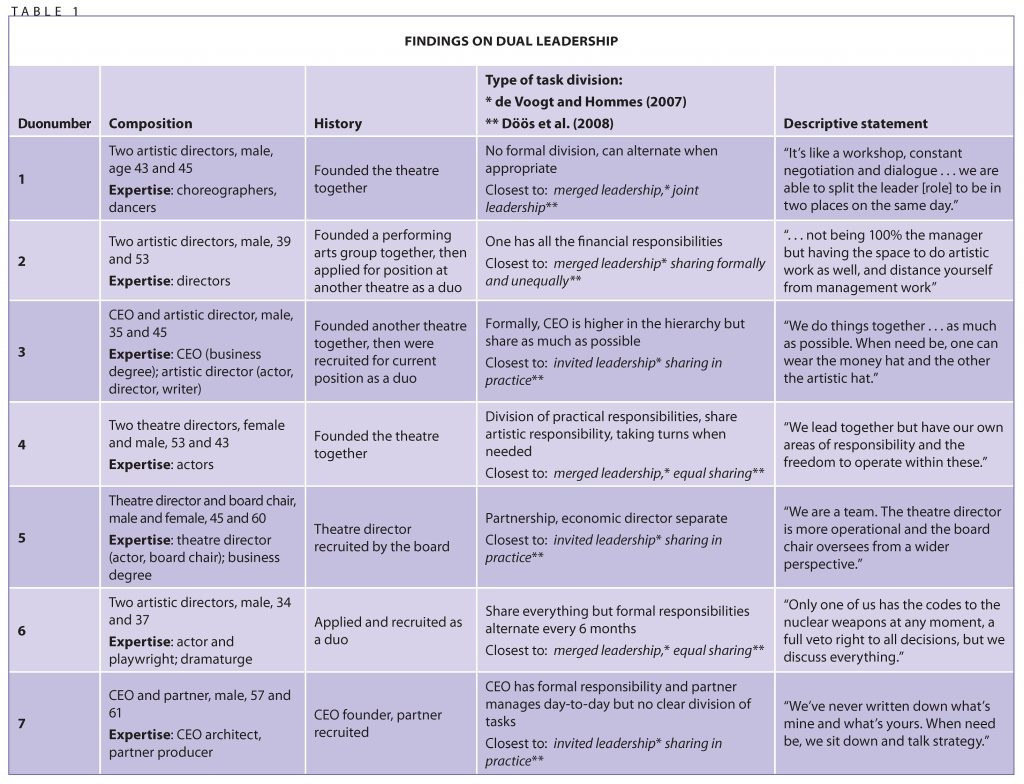 Dual Leadership in This Study

Figure 1 illustrates the general structure of traditional models of theatre management in Finland and the emergent structures of dual leadership. Table 1 describes the composition, history and division of tasks of each leader duo as well as our assessment of which type of dual leadership each constellation most closely resembles in the categorization of de Voogt and Hommes (2007) and Döös et al. (2008). We provide a descriptive statement to shed further light on each setting. These are not direct quotes but descriptions by the authors. 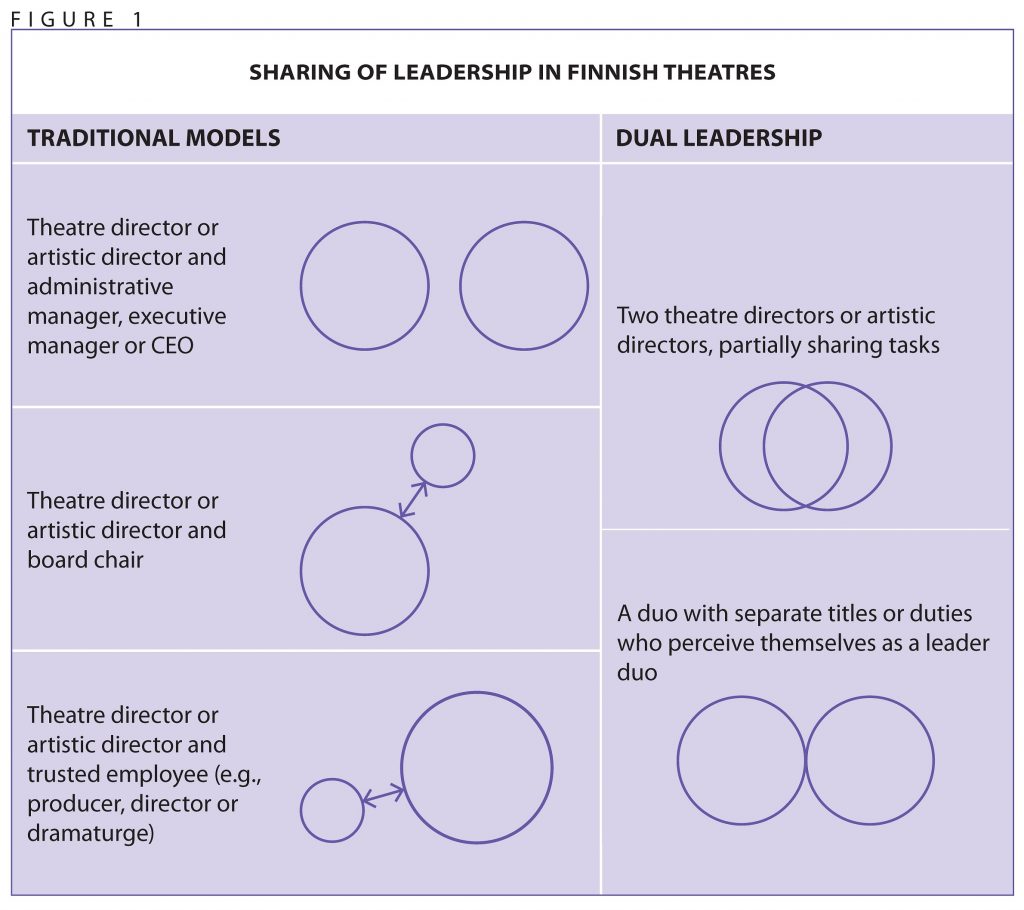 Next, three case narratives are presented to illustrate how new dual leadership is manifested in our data.

CEO and Artistic Director: Blurring of the Lines (Duo 3)

The formal setting at duo 3’s theatre reflects the traditional division between artistic and managerial responsibilities. In practice, however, the two leaders work differently. They strive to blur the division of tasks and share responsibilities as much as possible. They also share an office and say they want to run the organization together, so they share leadership in practice. The organization previously had one theatre director, so defining roles and responsibilities has taken some effort.

This leader duo, a playwright and an actor, were encouraged to apply together for the leadership position in this medium-sized city theatre. They take turns being the formal leader. The leader who is not in charge at the time can concentrate on artistic work. They speak of “24/7 peer support.” These leaders use their complementary skill sets and personalities in their work. Shifting formal responsibilities from one to the other is challenging, as it requires extensive communication and can cause confusion among stakeholders such as board members.

These two actors founded an independent theatrical company after working together on various projects. Their ways of cooperation and task division have grown organically. This company is now the largest independent theatre in the area and the duo’s position and work have changed. A very informal leadership has shifted towards the setting of stricter boundaries and a clearer division of duties in order to cope with the challenges of a growing organization. Both leaders are responsible for artistic decision-making, they are in charge of one stage each, and one is responsible for finance and the other for technology, public relations and marketing. Their leadership has become more strategic and less reactive.

Findings: “It is less windy at the top when you are together”

Previous research indicates that dual leaders see this leadership structure as a way of coping with the heavy workload of a leader (Wilhelmson et al., 2006). The leaders in our study cited the benefits of having a colleague with whom to reflect on ideas and discuss difficult situations. The leader duos had two skill sets and two networks available, allowing for greater opportunities and possibilities, as also described by Antrobus (2011). A possible drawback was the time needed to communicate effectively about issues, but this was balanced by the quality of the decisions made, the support received and the insights derived from different perspectives (Wilhelmson et al., 2006). Our interviewees described dual leadership as a way to create more time for concentrating on tasks and a way to “be in two places at one time,” again paralleling the view of Antrobus (2011). Several leaders emphasized the advantage of having a constant critic available, which improved their leadership and the quality of the art they produced. Mutual support and dialogue were cited as among the greatest advantages of the dual leadership structure. As suggested by the literature, the new dual leadership results in leadership that is more than the sum of its parts (Antrobus, 2011).

Denis, Langley and Sergi (2012) call for more attention to the issue of organizing dual leadership, within the duo itself as well as in relation to the organization. The issue of boundaries, meaning the inclusion or exclusion of others in the leadership group, is an interesting one in the theatrical context. According to our sample, boundaries can be both beneficial and problematic.

Although dual leadership has been used as a means to overcome problem situations in arts organizations (de Voogt, 2005), it appears that some problems can be perpetuated by choosing a leadership model that is new and unfamiliar to the organization. At the very least, a new leadership structure will raise questions and require careful preparation.

As suggested in the literature (e.g., Gronn and Hamilton, 2004; Miles and Watkins, 2007), trust is an essential component of successful dual leadership. The duo is an intimate constellation where “extreme honesty” must prevail, as stated by one of the leaders (duo 6) in our study. Another significant aspect of trust is that between the duo and the organization.

In exploring the dual leadership structure of the theatres in our study, we saw that the why is clearly interrelated with the how in the stories about the formation of the leader duos, as each duo has created a form of dual leadership that fitted with their personalities, goals and views on leadership. In the future, it would be beneficial for the understanding of the dynamics of new forms of dual leadership to explore the phenomenon through a wider range of methods and, for example, the careers of young theatre professionals who aspire to lead a theatre. There is anecdotal evidence of potential leaders saying they would not run a theatre alone due to the large number of diverse tasks and responsibilities involved. As the well-being of managers and leaders is often discussed in terms of long hours, fatigue or even burn-out, we see dual leadership as a model that could bring relief to such settings.

In future research it would also be important to account for similar constructs outside the arts sector, such as religious parishes, the medical field and expert organizations where leadership roles are complex and multi-faceted, and explore these settings in a similar manner. For example, private medical practice has often been based on a dual model of medical and economic leadership but as more doctors are earning MBA degrees and becoming involved in the business aspects of the practice, the leadership constellations are changing. The opportunities for constant dialogue, feedback and reflection that a more collaborative dual leadership provides could be very valuable in many organizations.

Antrobus, C., 2011. Two Heads Are Better Than One: What Art Galleries and museums Can Learn From the Joint Leadership Model in Theatre. Research paper. London: Clore Leadership Programme. Accessed 26 March 2015 at http://www.claireantrobus.com/wp/wp-content/uploads/2011/03/twoheads_7mar.pdf.

Wilmer, S.E., and P. Koski. 2006. The Dynamic World of Finnish Theatre: An Introduction to Its History, Structures and Aesthetics. Helsinki: Like.