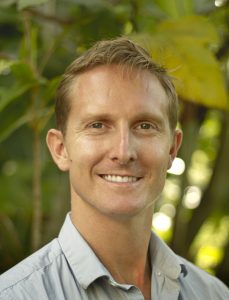 John Wells was an arts educator at a high school in Los Angeles, and a freelance script supervisor at the Colony Theatre in Burbank, California before joining the second cohort of the MMIAM program.  He graduated in 2015 and is now the Operations Coordinator at the Kennedy Theatre at the University of Hawaii at Manoa in addition to working as an independent filmmaker.  As someone coming from a teaching background, why was he drawn to this graduate program? Laura Adlers interviewed him via Skype at his new home in Hawaii to learn more about his experience with the program and his new career path.

As someone coming from a teaching background, why were you drawn to this graduate program?

I had always been passionate about the arts, but wanted to develop a solid foundation in arts management which would allow me to help others in achieving their artistic goals.  This, combined with an incessant desire to travel and explore different cultures, seemed like a great fit for me to expand my horizons and gain valuable experience.

What aspect(s) of the program were the most valuable to you for your career and why?

There was a turning point for me – professionally and personally – in Montreal. Our final project for Wendy Reid’s class Leadership in the Context of Cultural Organizations involved going out into the field and conducting interviews with organizations that we were most interested in. The initiative that this project required was crucial because it got us talking to the people we envisioned ourselves working with one day. When you’re in a classroom for most of the year, you don’t really get experiential learning opportunities like this. So the whole process was a breath of fresh air, and it catalyzed a networking growth spurt for me, for lack of better words.

We ended up taking a group trip to Toronto where I interviewed more organizations, and it really got me feeling comfortable walking into rooms and talking about the work that’s being done in the arts. I also landed an internship during this time (outside the program), and I credit that largely to the confidence that came from putting myself out there, failing, and doing it again and again.

What did you gain personally and professionally from living and studying in four different countries with students from around the world?

In many ways, I learned more from my classmates than I did from the classroom materials. And that’s not a knock on the instructors, it’s just that when you live and work so intimately with the same group of people for a year, you forge relationships that help you discover things about yourself and other cultures.

It’s not a walk in the park, though. Sometimes we like to think that we live in a utopian, globalized world where we’re all connected and harmonious. The truth is that engaging with other cultures and developing relationships takes sensitivity, tact, and hard work to make things happen. We’re all human, and what bonded us in this program was our common mission to enliven the arts, innovate in business, and inspire for the good.

Which campus was the most memorable for you and why?

The stay in Italy was such an invaluable experience for me on every level. I interned at the Milano Film Festival, and the experience of being immersed in a completely different culture was at first pretty alienating. But as I began to show through my work how much I cared about the mission of the organization, I began to forge relationships and share in the beauty of the festival.

I don’t mean to get metaphysical or anything, but there’s a certain feeling you get when you’re halfway across the world, as an American interning at a film festival in Milan (they jokingly called me their “illegal alien”), bonding with a Russian co-worker while eating Italian food at a Chinese restaurant. When you find those moments, where you can experience genuine connections with people over something as banal as a bowl of spaghetti, you realize there’s a universality there you may have never seen before. I’m most grateful for this.