Globally, governments have been calling on arts organizations to review governance, ensuring that it is a central mechanism in the sector (e.g., Nugent 1999, 2016; Paulus and Lejeune 2013) to aid sustainability, especially if arts organizations are to receive ongoing public funding (Paulus and Lejeune 2013). At the same time, there has been growing recognition that the breakdown in the relationships amongst board, staff, and stakeholders, in and around arts organizations, could be caused by poor governance (Mordaunt and Cornforth 2004; Reid and Karambayya 2009; Reid and Turbide 2012). Further, there is more and more demand for accountability by arts boards (Radbourne 2003), as well as a need to build bridges between stakeholders and arts boards by bringing the different players to the table (Paulus and Lejeune 2013; Turbide et al. 2008).

The extant literature often considers agency theory as the primary governance theory, but there is recent recognition of the complementarity of stewardship and stakeholder theories in enriching our understanding of governance issues (Andersson and Renz 2021). Hence, it is the applicability of these three theories at different times and in different ways that is examined in this article.

We argue that (1) combined agency and stewardship theories enable us to identify the “owners” of the museum, while stakeholder theory provides evidence of networks and ties that clarify accountabilities during a governance crisis; (2) agency and stewardship theories provide a foundation for monitoring behaviour of the non-profit board, including balancing diverse interests; and (3) the three complementary theories – agency, stewardship and stakeholder – illustrate board focus at various stages in the museum’s history. The three theories help in understanding the implications of the delimiting power and influencing decisions taken by the board, concerning behaviour in regard to decision-making and in the best interests of the organization, other institutions and society, while giving voice to the community (LeBlanc and Gillies 2005; Radbourne 2003).

In studies on crises, it has been found that board–staff relations vary over time as an organization develops (Reid and Turbide 2012). Our case study of Castlemaine Art Museum in regional Victoria, Australia, examines the relationship between board, staff and stakeholders before, during and after a crisis. We assess governance practices that precipitated the crisis.

Agency theory views the organization from an internal perspective of interactions between principal (board) and agent (staff) in relation to authority and control (Radbourne 2003). Agency theory is defined as a focus on the economic interests of the organization and its financial performance in relation to the owners in for-profit businesses. It helps us to understand the tensions between principal and agent but focuses on “ownership.” However, in non-profit organizations it is unclear who is the principal as there are no owners (Miller 2002; Stone and Ostrower 2007). Most non-profit organizations are characterized by a separation of “ownership” and control, with explicit distinctions between oversight provided by the board and the day-to-day decisions of the executive (Van Puyvelde et al. 2012). Board members monitor the executive’s propensity for self-interested behaviour, separating “ownership” from control, protecting the institution from malfeasance and minimizing risk through appropriate decision-making (Miller 2002). Monitoring behaviour reviews power tensions between the chair and the executive while ensuring that relevant will and skill are represented on the board (Pettigrew and McNulty 1995), which can nonetheless create visible longstanding endemic tensions (Cornforth 2004; Edwards and Cornforth 2003; Kreutzer and Jacobs 2011) on non-profit boards, especially in the arts. When they rise to the surface, such tensions can result in crises on arts boards (Reid and Turbide 2012), the recognition of which requires wider theoretical understanding and application than is encapsulated in agency theory. These matters have led to agency theory being contested in arts organizations, given its economic and for-profit focus, with limitations leading to calls for a review of its singular relevance to arts governance.

Stewardship theory is also considered a principal-agent theory (Coule 2015). However, it diverges from agency theory in that it assumes that principals and agents are motivated to act in the interests of principals even if goals conflict (Coule 2015). Stewardship theory is defined as the manner in which assets are looked after, or “stewarded,” through rules-based accountability with objective standards of assessment, with the principal-agent maintaining control and being held responsible for actions (Coule 2015). Through this theoretical lens, the voices of the less powerful, such as those in local communities, may feel disempowered, as responsibility and accountability remain solely with the principal-agent and the organization. With some arts organizations struggling to adjust in a volatile, uncertain and disruptive external environment, boards have faced challenges (Reid and Turbide 2012) in relation to agency and stewardship. Uncertainty is paralleled by increased internal scrutiny by the board and external scrutiny by funders and governments, necessitating greater external accountability and transparency, boosting requirements for boards to be more adept (Cornforth and Edwards 1999; DiMaggio 1985; Stone and Ostrower 2007) at pluralistic rather than unitary accountability.

Stakeholder theory recognizes the expressive or “felt accountability” that is values driven and is negotiated with stakeholders without direct accountabilities, often based on “implicit, subjective standards of assessment” (Coule 2015, 78). Stakeholder theory recognizes the need to function on the part of those indirectly affected by decisions. This view is based on the definition of governance as crucially concerned with how boards and CEOs relate to their networks of others, such as communities and their representatives (Radbourne 2003), extending responsibilities beyond accounting or legal requirements to those based on processes and relationships as means of driving organizational transformation. Historically, in the non-profit context, capacity to lead and interact with the community fell to “steering committees” (Inglis et al. 1999) rather than boards. As the non-profit sector developed, the appointment of staff at the executive level led to a “reshuffling” of power dynamics between newly constituted boards and staff (Ferkins and Shilbury 2012) and to greater inclusion of stakeholders. Perhaps due to traditional “committee thinking,” where volunteers were charged with both “thinking” and “doing” (Inglis et al. 1999), the focus of early non-profit governance studies was on the separation of strategy (“thinking”) and implementation (“doing”) (Carver 1997). Within a non-profit setting, theories have less often addressed the complex nature of board processes (Chadwick-Coule 2011; Parker 2007) or indeed broader governance accountabilities to communities (Huse 2005; Pepper and Gore 2015).

We examined the period before, during and after the crisis, identifying “reasons,” “consequences” and “recovery strategies” (Kerwin et al. 2011; Mordaunt and Cornforth 2004; Reid and Karambayya 2009) in three phases of study. Our research question was: How do governance theories interrelate, explaining governance dynamics and tensions over time?

Following Langley (1999), we investigated the case using data composed of events to understand how and why things evolve over time. Temporal bracketing provided a means of structuring data, which is illustrated in a process flow chart. 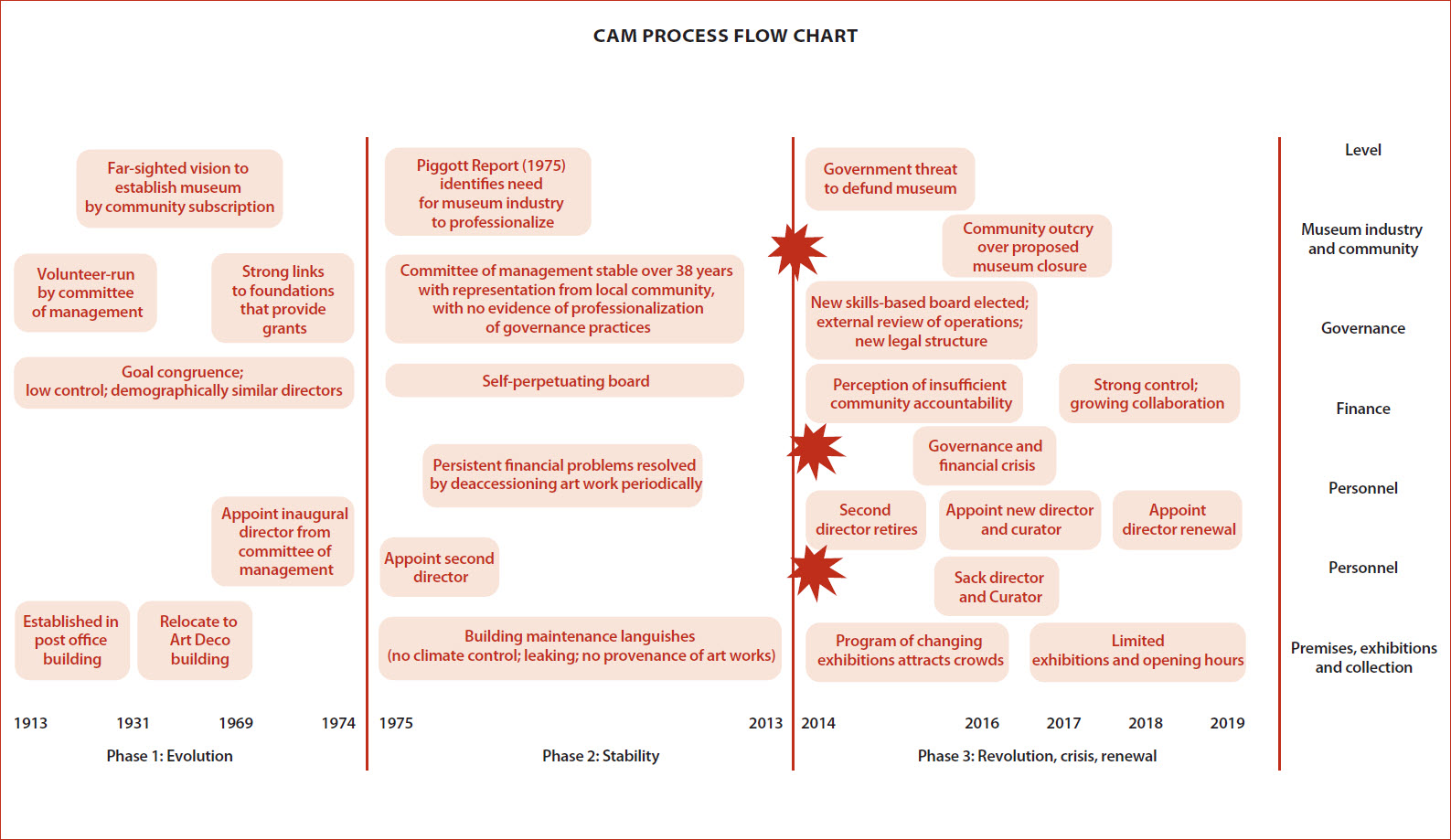 The CAM Process Flow Chart presents an event chronology that identifies the process that led to a governance crisis followed by the adoption of a community engagement approach to reform and renewal. This flow chart is of potential value in research and praxis that unpacks the dynamics and causal pathways of governance and its problems.

In seeking to answer our research question, we structured our findings around three themes – ownership, monitoring behaviour and community accountability – that emerged from the data and the three phases of CAM development.

In phase 1, agency theory underpinned the founding of CAM, while stewardship theory provided the rationale for the establishment of trust between board and staff. In phase 2, adherence to stakeholder theory could have helped the board link with the necessary internal and external networks, beyond the local community, to ensure that CAM was set up for long-term success. New connections could have resulted in improved organizational performance by CAM through exploitation of network ties across relationships (Larson 1991). In phase 3, especially during the crisis, the “clubby,” casual, less rigorous oversight from “former times” was abandoned in favour of agency rigour and a reaching out to a wider stakeholder group. Board members saw themselves as stewards for the community, in line with the theory, engaging widely with stakeholders but overlooking local community stakeholders. The learnings that arose from the crisis applied going forward, presenting governance opportunities as well as challenges that were implemented after the crisis.

This article integrates three governance theories – agency, stewardship, and stakeholder – before, during and after a governance crisis, offering insights for non-profit boards regarding governance plurality.

The longitudinal process flow chart around the unfolding of a crisis provides managers with guidance should they face their own crisis, while the typology of non-profit governance theories applies theory to the practice of ownership, monitoring and community accountability, which may further aid arts managers.

This case study illustrates how the integration of governance theories leads to greater understanding that may help boards of directors in praxis avoid pitfalls and inform future strategy. The theories discussed in this article illustrate the fundamental challenges in governance practice, which theories rationalize. We take the view that much can be learned from a crisis, but crisis has been little examined, perhaps because it is often difficult to document.

Contact us at mmiam@hec.ca to request a free copy of the full article published in the International Journal of Arts Management, Volume 24, Number 1, Fall 2021.

You can also browse our abridged research articles here.